The international consortium of scientists and conservationists that is working towards preventing the extinction of the northern white rhino through advanced assisted reproduction technologies is happy to announce that in December 2020, two new northern white rhino embryos were produced. On December 13, the team of Leibniz Institute for Zoo and Wildlife Research (Leibniz-IZW), Safari Park Dvůr Králové, Kenya Wildlife Service and Ol Pejeta Conservancy successfully performed an oocyte collection in Kenya. After immediate transportation of the recovered oocytes across continents, the embryos were created at Avantea laboratory in Cremona (Italy) following maturation and fertilisation of the oocytes with the semen of Suni. They were cryopreserved on Christmas eve when they reached the blastocyst stage suitable for freezing and increase the total number of viable embryos produced so far to five. This nourishes the hope that despite challenges and delays caused by COVID-19 the northern white rhino can still be saved. The next steps in the programme are already underway. 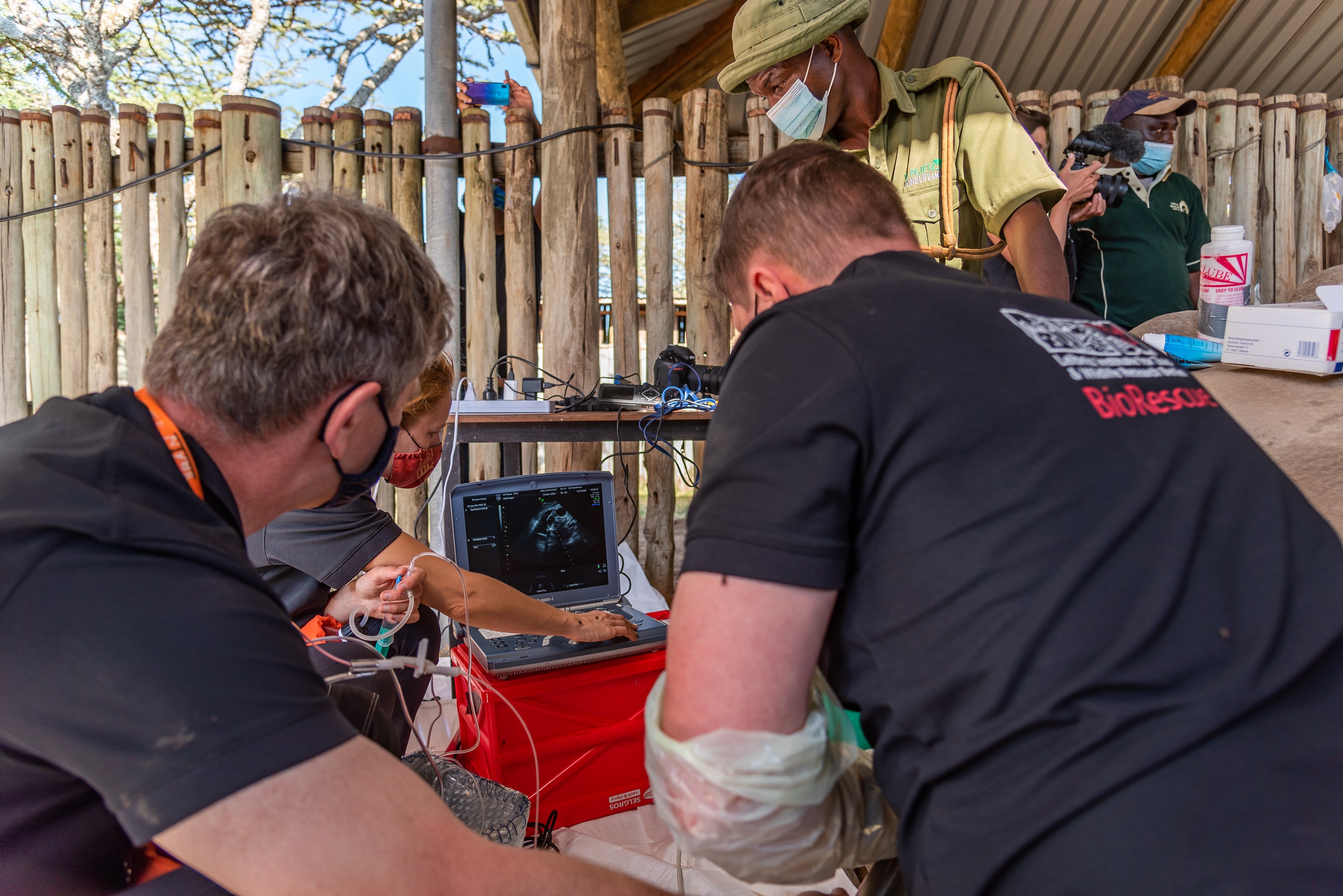 The COVID-19 pandemic seriously affected the process of oocyte collection and fertilisation in 2020, delaying the production of new embryos in addition to the three embryos created in 2019. At last, in December 2020, 14 oocytes were retrieved from Fatu’s ovaries using a probe guided by ultrasound, after the animal was placed under general anaesthesia. The oocyte pickup device is an internationally approved patent. Both the anaesthesia and the ovum pickup procedure went smoothly and without complications. After incubating and maturing the egg cells in the Avantea laboratory, eight of them were fertilised with thawed sperm from deceased northern white rhino bull Suni using a procedure called intra-cytoplasmic sperm injection (ICSI). Two fertilised oocytes developed into a viable embryo with the help of Geri®, an innovative benchtop incubator with integrated continuous embryo monitoring capabilities designed to provide an individualised and undisturbed incubation environment and donated by Merck to the project, who further continued to support the initiative financially in 2020.

The embryos are now stored in liquid nitrogen along with the three embryos from previous procedures.

Unfortunately, no oocytes were retrieved from Najin, who is Fatu’s mother. Previously, collecting oocytes from Najin was successful, but no embryos were created from her egg cells. The team of rhino reproduction specialists from the Leibniz-IZW, led by Prof Hildebrandt, see two possible reasons for this repeatedly negative outcome: Najin’s age and/or health issues could affect the quality of her egg cells. In addition, the 31-year-old rhino has a large, tumour in her abdomen, which at this point does not cause acute health problems but may hamper the functionality of reproductive organs. Since every step of every procedure within the programme is accompanied by a thorough ethical risk assessment, the team will decide only after a health check whether to continue oocyte collection from Najin during the next visit planned for later this year.

The successful embryo creation in December 2020 is a conciliatory end to a challenging year for the northern white rhino rescue programme and the world of conservation at large. The procedures scheduled for March and June had to be cancelled or postponed owing to the global COVID-19 pandemic. In August 2020, the team was finally able to repeat the oocyte collection, with the disappointing result of no embryos created. The reproduction specialists concluded that the unintended span of nearly nine months between procedures affected the results. The successful procedures in December have proven that a regular rhythm of repeated oocyte collections every three to four months is key to their success. Therefore, the team intends to continue with this cycle if possible.

In December 2020, the team also started the next phase of the ambitious project – the preparations of the transfer of the embryos into southern white rhino females. For this purpose, a southern white rhino bull was transferred from Lewa Wildlife Conservancy to Ol Pejeta Conservancy in November 2020. This bull has fathered several offspring and is thus considered a proven breeder, which is the reason he was a suitable candidate to be taken out of the breeding group at Lewa and transferred to Ol Pejeta. At Ol Pejeta, he was sterilised by the BioRescue team with a minimally invasive non-surgical procedure using state-of-the-art equipment. A thorough ethical risk assessment has been applied to this procedure as to all procedures of the programme. The sterilisation procedure went smoothly and without any complications. The bull started to eat immediately after the anaesthetics wore off. As a sterilised bull he will reliably indicate through his behaviour the reproductive cycle of potential surrogate mothers without the risk of impregnating them. This indication is a crucial prerequisite for transferring the valuable northern white rhino embryos into surrogate mothers at the correct timing of their reproductive cycle. After the team has confirmed the success of sterilisation in March 2021, the bull will be constantly monitored to record whether his behaviour indicates potential surrogate mothers’ cycles. 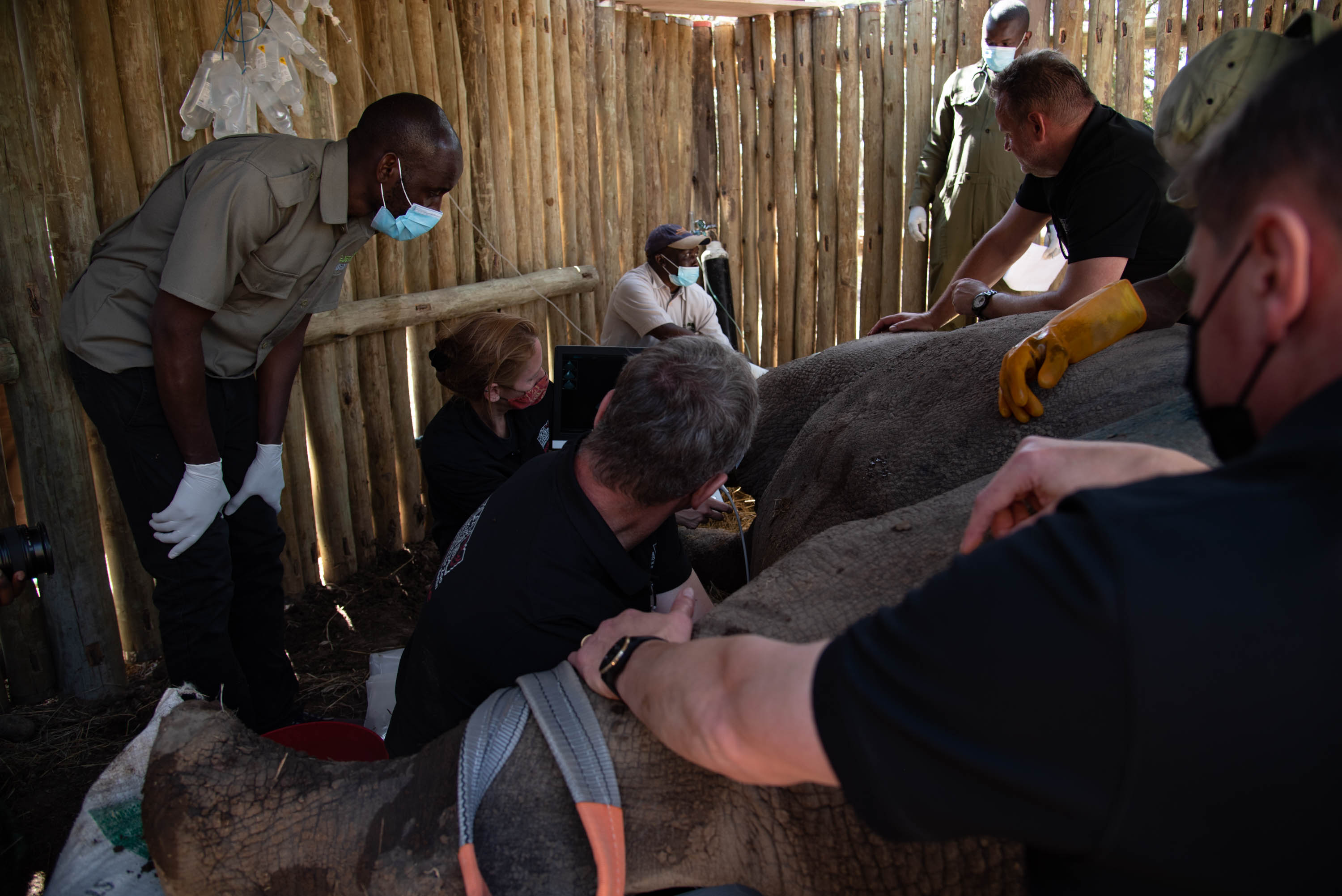 The “BioRescue” research programme is led by Leibniz-IZW and funded by the German Federal Ministry of Education and Research (BMBF). Its goal is to significantly advance assisted reproduction techniques (ART) and stem cell associated techniques (SCAT) complemented with a comprehensive ethical assessment carried out by the University of Padova for the benefit of the northern white rhinoceros. The consortium is significantly funded by the BMBF with additional smaller donors such as the Czech foundation Nadace ČEZ or the Richard McLellan Rewind Rhino Extinction Foundation from the USA. The consortium comprises internationally renowned institutions from Germany, Italy, Czech Republic, Kenya, Japan and USA. The programme is strongly supported by the Kenyan Government and by Hon Najib Balala, Kenya’s Cabinet Secretary, Ministry of Tourism and Wildlife. “On behalf of the people and the Government of Kenya, I would wish to take this opportunity to acknowledge with appreciation the impressive progress achieved so far by the joint team of Kenyan and international scientists working to save the endangered Northern White Rhino from extinction.

As one of the leading country’s globally in wildlife conservation, we are committed to continue facilitating this collaborative process to its logical conclusion by providing support to enable this important work to continue. I am delighted that the world has a chance through use of cutting edge and innovative technologies to save this threatened wildlife species for posterity and that Kenya is playing its part in this critical conservation effort. We must do everything possible to save this species from extinction. Remember, extinction is forever. Once we lose this species we will have lost an iconic animal which will not be seen again by future generations,” Hon Najib Balala says.

Since the beginning of the year, “BioRescue” has a new website (www.biorescue.org). The page is a resource of knowledge and news around the scientific part of the northern white rhino rescue programme. It furthermore portrays the people behind the mission, collects visual media accounts of the mission in multiple galleries and offers users the possibility to support the programme through donations.

Description
The Leibniz-IZW is an internationally renowned German research institute of the Forschungsverbund Berlin e.V. and a member of the Leibniz Association. Our mission is to examine evolutionary adaptations of wildlife to global change and develop new concepts and measures for the conservation of biodiversity. To achieve this, our scientists use their broad interdisciplinary expertise from biology and veterinary medicine to conduct fundamental and applied research – from molecular to landscape level – in close dialogue with the public and stakeholders. Additionally we are committed to unique and high quality services for the scientific community.
Read More Visit Website

Description
Kenya Wildlife Service is the principal government institution that conserves and manages wildlife for Kenyans and the world. It also enforces related laws and regulations.
Read More Visit Website

Description
Ol Pejeta Conservancy is the largest black rhino sanctuary in east Africa, and is the only place in Kenya to see chimpanzees. It is also home to the last two northern white rhinos on the planet. Ol Pejeta’s cutting-edge wildlife security includes a specialised K-9 unit, motion sensor cameras along its solar-powered electric fence, and a dedicated Rhino Protection Unit.
Read More Visit Website

Description
University of Padua in Italy is one of the oldest in the world, celebrating 800 years. Its Department of Comparative Biomedicine and Food Science is developing leading research and education in the field of wildlife conservation and welfare with a special focus on ethical assessment and evaluation of research projects and educational programs.
Read More Visit Website